This past week we spent a couple of hours immersed in "Jewelry for America," a new exhibit at the Metropolitan Museum of Art that will run through April 5, 2020. Organized by American Wing curator Beth Wees, the show draws from the Met's permanent collection (including items newly acquired or rarely on display) to peer into the jewel boxes of well-heeled Americans across three centuries. 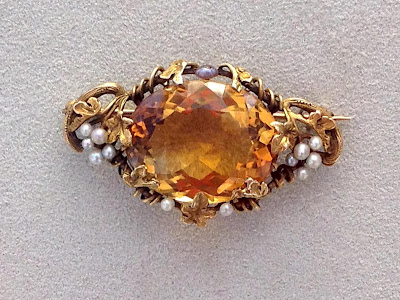 "A large faceted citrine surrounded by floral sprays, twisting grape vines of chased gold, and grape clusters of seed pearls. The piece is stamped "14KT" and has an applied plaque marked "BELL," representing the Denver gem dealer George Bell. The design of the brooch, however, has been attributed to Gustav Manz."
—The Metropolitan Museum of Art

Naturally, we were excited to see a circa 1905 brooch that the Met's curators attribute to Gustav Manz (as designer and maker), which is marked for Manz's longtime client, New York gem dealer and jewelry manufacturer George Bell (1852-1944).  According to Manz's costbooks (archived at Winterthur Museum), Bell purchased hundreds of mountings for resale or, possibly, recasting. 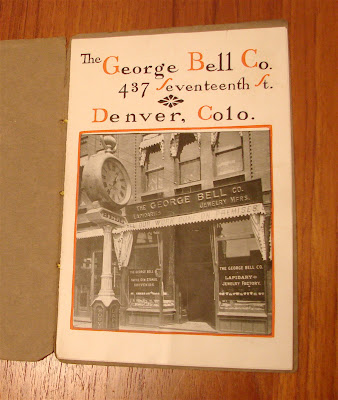 Bell—shortened from Uibel—entered the trade in 1877, and first exhibited wares such as sea-bean fobs and other gentlemen's accessories set with alligator teeth at the Paris Exposition of 1889, under the label Uibel & Barber with then-partner Robert Berry Barber. A widower with two young children (after his first wife and a young son succumbed to pneumonia), Bell had married Barber's niece, Mary Porter, with whom he had seven more children. 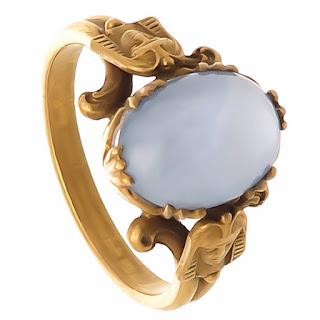 In the 1890s, at the height of the turquoise and silver mining boom, the family moved out to Colorado where Bell opened a factory that cut stone from local mines. He commissioned pamphlets advertising rings and brooches set with matrix turquoise, peridot, and other "native stones" which he brought to the St. Louis World's Fair in 1904 (where Manz's Greco-Roman and Egyptian revival mountings for F. Walter Lawrence were also on display) and the Louis & Clark Exposition in Portland, Oregon, the following year. 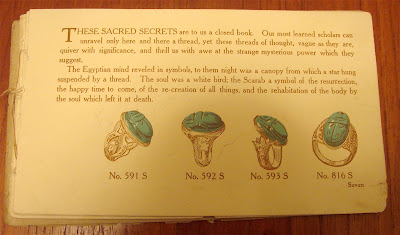 Returning to Manhattan in the early 1900s, Bell briefly paired up with other partners before opening the George Bell Jewelry Manufacturing Company at the corner of Fifth Avenue and 42nd Street, opposite the recently built Main Branch of the New York Public Library. There he was joined by his two eldest sons, Thomas and James, both graduates of Columbia University's School of Mining (a third son, Robert, entered the company after serving in WWI). 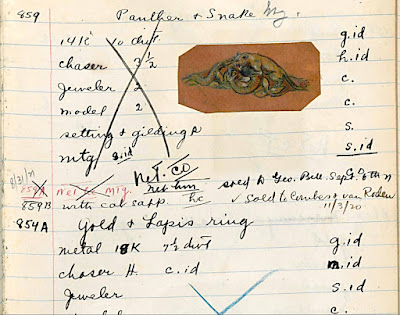 Always attuned to market trends, Bell was cognizant of Manz's fine work for such firms as Tiffany & Co, Marcus, Dreicer, E.M. Gattle, and Black Starr & Frost and promoted his own line of turquoise and Egyptian novelties in artful brochures ("Scarabaeus") and magazines such as Scribner's and The Theatre, earning the tongue-in-cheek sobriquet "The Tiffany of 42nd Street" in local press.

In 1921, Bell and his wife moved out of the city into a large house in bucolic Hastings-on-Hudson. He remained active in the trade well into his 90s: the headline for his obit in the local paper styled him as "Hasting's Oldest Commuter." 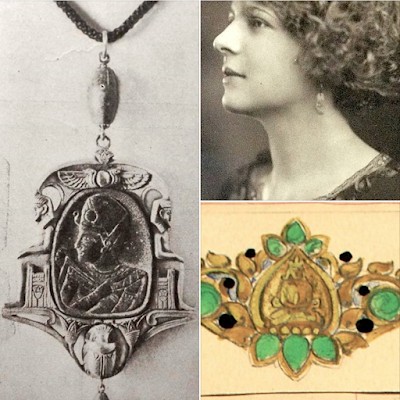 In January 1924, the 8th Industrial Art Exhibition opened at The Metropolitan Museum of Art. The show was assembled by Richard F. Bach, the museum's first decorative arts curator specifically charged with facilitating professional artisans access to the Met's collections "for the betterment of American design and craftsmanship."

A review of the exhibit in Jewelers' Circular featured a photo of one of Gustav Manz's Tutankhamun-inspired necklaces—at least one of which was purchased by Raymond C. Yard. Also shown was a Manz ring depicting a panther or tiger confronting a snake in the style of French sculptor Antoine Barye, that was carried by (seemingly) every jewelry house in the city including Tiffany & Company. 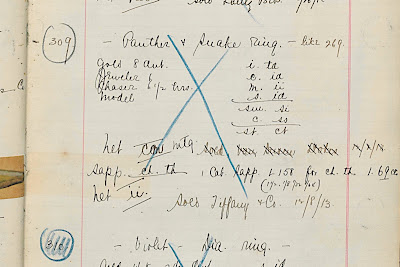 Besides drawing from his Egyptian and animal repertoire, Manz's case contained ornaments that, in the reviewer's words, "follow very distinctly the Oriental type" and were likely quite similar to the jade and sapphire Buddha brooch in the illustration, one of numerous Asian-inspired pieces Tiffany & Co. purchased from Manz's studio.

During this period, Manz's 19-year-old daughter Doris worked as his commission agent and undoubtedly advised him about styles and motifs most appealing to the post-war era's New Woman. In the photo above, she's wearing her father's jade "earvices" which dangle just below her flapper bob...